The humble narrator of this blog for many years has opened a bed and breakfast inn in New Orleans, LA with his wife of many years.

We look forward to hosting you and sharing everything we know about New Orleans.

I rewrote a 1940s beer advertisement:

In this fun-loving land of ours, hops and malt are all about the good times spent with neighbors.  A small part of this great land of yours and mine is an ancient French city that was a province of the Spanish crown, that is governed by Napoleonic codes and the timeless law that the good times should be allowed to roll without interference.  In New Orleans, like everywhere in the U.S. of A, people get thirsty.

America is a country of kindliness, of friendship, and of good-natured tolerance.  New Orleans sets the standard for all three qualities within its ample, broad bosom.  I’ve heard that an apple tree grew in the center of Jackson Square long before the Creoles arrived to plant their flags.  If there is sin in New Orleans, it is quicker than liquor and it is quickly forgiven.  Perhaps no beverages are more “at home” on more occasions than good American beer and ale, especially if it is drunk in New Orleans.

It is every American’s right to enjoy beer and ale, a family-friendly, community-friendly beverage, especially in New Orleans, LA.  Our American heritage of personal freedom is shown to all the world in our per capita beer consumption statistics.  Nowhere is this more true than in New Orleans.  Nowhere else is the flag of freedom flown so high, wtih less worry or care, or with more friendly dispostion.

Be a New Orleanian, wherever you are.

If you are thinking of visiting New Orleans anytime soon.  We know of a nice historic bed and breakfast in the middle of Esplanade Avenue.  Close to the French Quarter and the usual destinations, and close to everywhere else.
Posted by La Belle Esplanade at 8:32 PM 1 comment:

I know, I know.  The posting on this blog has been spotty of late.  That's because I have been writing over here at La Belle Esplanade.  This blog has wandered off into my peripheral vision as I enter into my new career as an innkeeper.

Mrs. King and I are proud custodians of a historic property on picturesque Esplanade Avenue in New Orleans, Louisiana, USA.  We have completed some extensive renovations and we are open for business as a historic New Orleans bed and breakfast with five two-room suites with private balconies and lush gardens in the back.

While the La Belle Esplanade blog does detail what we are doing around the property to make it a showplace and headquarters for visitors to our fair city, the content is still full of that odd Whalehead magic, turns of phrase, and interesting (to me) explorations of our neighborhood and the city at large.  Check it out.  Balaenius Rex!

If you know anyone who is visiting New Orleans and you think they will appreciate staying in a living neighborhood close by the majority of usual tourist destinations, feel free to direct them to our website.  The url?  Why, it is whaleheading.com, 'natch.  We serve a different breakfast every day featuring locally produced items procured from farmers, nearby bakeries, and restaurants.  The furnishings are a mix of period antiques and curios in a very convenient location.  We offer complimentary bicycles for people who want to explore New Orleans in the round.

Be a New Orleanian wherever you are.

A votre sante, and,
With a handshake,
Matthew "Whalehead" King

Posted by La Belle Esplanade at 6:48 PM No comments:

There was a penny on the sidewalk, on Esplanade Avenue, between North Galvez Street and North Villere Street.
A man in a plaid jacket walked by it, never noticing it.  A man in a wheelchair rolled over it, not noticing it.  It started to rain.  A woman looking down, under her umbrella did not see the penny in the puddle.  A little girl carrying a plastic bag full of soda pop and eggs hurried home, looking at the sky.  The copper in the penny turned another shade of green.
One hundred pennies make a dollar.  One hundred dollars make a hundred dollar bill.
The rain stopped sometime after midnight, and the moon came out.  The leaves overhead rustled in a light breeze.  Everything was fine.
A baby was born at exactly 1:01 AM, across town.  His mother fell asleep with him on her chest.  His father was not there for the birth, except in spirit.  The baby’s grandmother read a magazine a few rooms away.
A trashcan on the sidewalk overflowed with cardboard and rotten fruit.  Someone dropped an empty pint bottle into it.  All the windows along the street were dark.  A light went on in one of the houses.
There were less than a hundred stars visible in the sky past the glow of the streetlights.  They were all bright.
The filament in the lightbulb glowed yellow.  The bare room had white walls, a white ceiling, and an unstained wood floor.  The window was black from the inside.  There was a jar of pennies on the mantle, some of them old, some of them new.  There were more than a hundred of them, mixed with nickels and dimes, mixed with some quarters.  Not a hundred dollars in the whole bunch, but enough.
Posted by La Belle Esplanade at 8:03 AM No comments:

Who is the most beautiful woman on Esplanade Avenue in New Orleans, Louisiana?  I know her well. I've been keeping time with her on the sly, fulfilling daydreams and while she whispers sweet somethings in my ear.

Regular readers have noticed that I haven't been posting as much as usual.  I've been keeping time with a lady and I'm being coy about it.  Please do not flood my inbox with mail.  All will be revealed in good time.

This venerable blog, started in 2002, to the best of my recollection, which is a pretty good run in internet terms, may be discontinued soon.  Not because I have no use in keeping the public informed of my scintillating observations, but because it may be more worthwhile to put them elsewhere.

The most beautiful woman on Esplanade Avenue in New Orleans, LA, has been whispering her wishes into my left ear, and her notions haven't slipped out my right.  It is more than pillow talk.  There are contracts involved.

Baleanius Rex! will be up and running for another month at least.  Even when this venerable blog, that has given so many people so much pleasure over the years, folds, there will be another media outlet where regular readers can get their accustomed fix.  Since money will be involved with this new platform, a more regular and reliable schedule can be assured.  Stay tuned.  In the meantime, enjoy the parade.

With a handshake,
and a tip of the fedora,

Your Man In The Field.

Boston to New Orleans by motorcycle

Past Notes and Notations

Be advised: Not all that you read is literally true.

My reports at Examiner.com

A history of St. Expedite in Nola on Kindle. 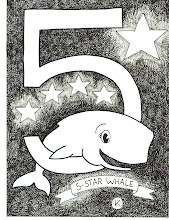 A native New Englander who has relocated to New Orleans in 2010 and opened an inn. This blog has a deep archive documenting my life from Connecticut to Massachusetts to New Orleans.

Popular posts. Look around and knock some of these older ones out of the ratings.

A rating, for what that is worth: